Abstract:
The presence of amplitude modulation (AM) in wind farm noise has been shown to result in increased annoyance. Therefore, it is important to determine how often this characteristic is present at residential locations near a wind farm. This study investigates the prevalence and characteristics of wind farm AM at 9 different residences located near a South Australian wind farm that has been the subject of complaints from local residents. It is shown that an audible indoor low-frequency tone was amplitude modulated at the blade-pass frequency for 20% of the time up to a distance of 2.4 km. The audible AM occurred for a similar percentage of time between wind farm percentage power capacities of 40% and 85%, indicating that it is important that AM analysis is not restricted to high power output conditions only. Although the number of AM events is shown to reduce with distance, audible indoor AM still occurred for 16% of the time at a distance of 3.5 km. At distances of 7.6 and 8.8 km, audible AM was only detected on one occasion. At night-time, audible AM occurred indoors at residences located as far as 3.5 km from the wind farm for up to 22% of the time.

[ABSTRACT] In addition to the overall noise level, periodic variations in the loudness of wind turbine noise, known as Amplitude Modulation (AM), also significantly contribute to the annoyance experienced by residents living near wind farms. Due to the high dependence of AM on meteorological conditions and the type of wind turbines, the level and duration of AM are hard to predict. These characteristics have an important impact on the annoyance response of residents. The level of annoyance is expected to depend on the AM depth, the number of AM occurrences and the AM continuity. The aim of this paper is to investigate AM characteristics in the vicinity of two wind farms in South Australia. It has been found that to successfully quantify tonal AM based on the Reference Method proposed by the UK Institute of Acoustics, removing the A-weighting, changing the range of band-pass filter frequency and reducing the prominence ratio are also necessary. AM density at night-time is much higher than at day time (25% versus 15%). However, there is not significant difference between AM depth at night-time and day time. Furthermore, AM is more likely to occur when the wind turbines are operating significantly below their maximum rated power. 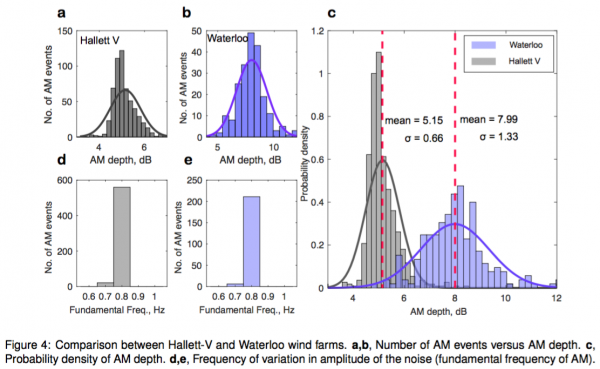 Summary of the Effect of the Medical and Scientific Evidence

On our analysis, a number of propositions emerge from the medical and scientific evidence. Some of those propositions had unanimous support by the relevant experts, and others had the support of most.

The propositions which we understand have unanimous support from the relevant experts or are not contested include the following:

We consider that the evidence justifies the following conclusions: