Abstract:
Wind is increasingly being used as a renewable energy source around the world. Avian mortality is one of the negative impacts of wind energy and a new technique that reduces avian collision rates is necessary. Using the most frequently-killed species, the griffon vulture (Gyps fulvus), we studied its mortality at 13 wind farms in Tarifa, Cadiz, Spain, before (2006–2007) and after (2008–2009) when selective turbine stopping programs were implemented as a mitigation measure. Ten wind farms (total of 244 turbines) were selectively stopped and three wind farms (total of 52 turbines) were not. We found 221 dead griffon vultures during the entire study and the mortality rate was statistically different per turbine and year among wind farms. During 2006–2007, 135 griffon vultures were found dead and the spatial distribution of mortality was not uniformly distributed among turbines, with very few turbines showing the highest mortality rates. The 10 most dangerous turbines were distributed among six different wind farms. Most of the mortalities were concentrated in October and November matching the migratory period. During 2008–2009, we used a selective stopping program to stop turbines when vultures were observed near them and the griffon vulture mortality rate was reduced by 50% with a consequent reduction in total energy production of by the wind farms by only 0.07% per year. Our results indicate that the use of selective stopping techniques at turbines with the highest mortality rates can help to mitigate the impacts of wind farms on birds with a minimal affect on energy production.

Highlights:
► We studied griffon vulture mortality at 13 wind farms in Tarifa, before and after selective stopping program was implemented.
► 221 Dead vultures were found during the study and mortality rate was different per turbine and year among wind farms.
► During 2006–2007, 135 vultures dead and not uniformly distributed among turbines. Mortalities concentrated in October–November.
► During 2008–2009, program to stop turbines when vultures were observed near was applied. Mortality rate was reduced by 50%.
► Selective stopping turbines with the highest mortality rates can help to mitigate the impacts of wind farms on birds.

Action on multiple fronts, illegal poisoning and wind farm planning, is required to reverse the decline of the Egyptian vulture in southern Spain

ABSTRACT:
Large body-sized avian scavengers, including the Egyptian vulture (Neophron percnopterus), are globally threatened due to human-related mortality so guidelines quantifying the efficacy of different management approaches are urgently needed. We used 14 years of territory and individual-based data on a small and geographically isolated Spanish population to estimate survival, recruitment and breeding success. We then forecasted their population viability under current vital rates and under management scenarios that mitigated the main sources of non-natural mortality at breeding grounds (fatalities from wind farms and illegal poisoning). Mean breeding success was 0.68 (SD = 0.17) under current conditions. Annual probabilities of survival were 0.72 (SE = 0.06) for fledglings and 2 yr old non-breeders, 0.73 (SE = 0.04) for non-breeders older than 2 yrs old and 0.93 (SE = 0.04) for breeders. Probabilities of recruitment were 0 for birds aged 1–4, 0.10 (SE = 0.06) for birds aged 5 and 0.19 (SE = 0.09) for older birds. Population viability analyses estimated an annual decline of 3–4% of the breeding population under current conditions. Our results indicate that only by combining different management actions in the breeding area, especially by removing the most important causes of human-related mortality (poisoning and collisions on wind farms), will the population grow and persist in the long term. Reinforcement with captive breeding may also have positive effects but only in combination with the reduction in causes of non-natural mortality. These results, although obtained for a focal species, may be applicable to other endangered populations of long-lived avian scavengers inhabiting southern Europe.

Download original document: “Action on multiple fronts, illegal poisoning and wind farm planning, is required to reverse the decline of the Egyptian vulture in southern Spain”

The following pictures are from a wind farm where due to the weak conditions of the subsoil a deep foundation with piles has been necessary, using a technique known as continuous flight augering (CFA).

As you can see, with the same machine we drilled and pumped the concrete in the hole. 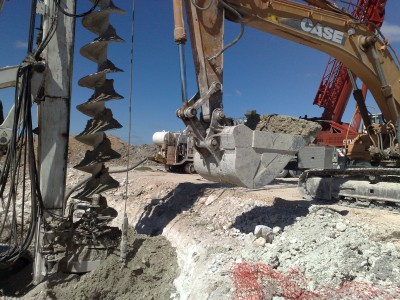 A dry hole has been made, without the use of bentonite or others drilling fluids to maintain vertical the walls of the hole: the earth is removed using an Archimedes’ screw, and than concrete is pumped inside the hole, slowing lifting the tool.

The machine uses a manometer to know the pressure used to inject the concrete in every moment: this way, it is possible to detect if there are holes underground.

Then, the reinforcement bars are lifted using a crane and carefully inserted in the hole. Small plastic wheels are positioned at the sides of the steel structure to make easier to lower it in the hole. 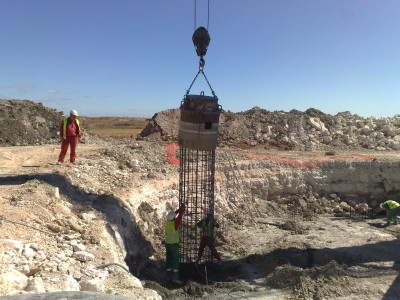 When the concrete hardens, after about a week, the head of the piles is removed using drills, leaving the steel bars clean and ready for the construction of the foundation. 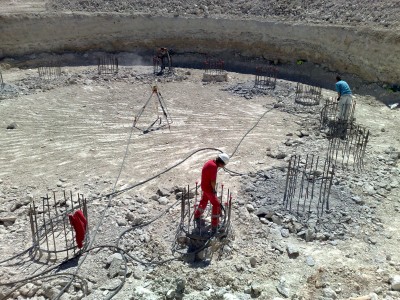 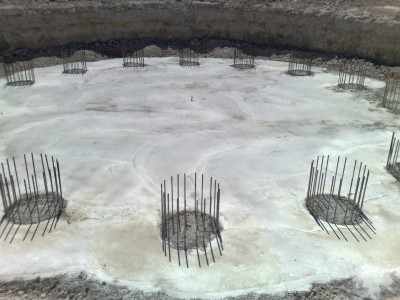 Wind energy: The case of Denmark

Economic impacts from the promotion of renewable energies: The German experience