ABSTRACT—
We investigated whether long-term exposure to wind turbine noise (WTN) including low-frequency noise generated by wind power facilities is a risk factor of sleep disorders. We performed an epidemiological study of living environment and health effects, surveying 9,000 residents (≥20 years) living in areas with operational wind power facilities. Sleep disorders were assessed using the Athens Insomnia Scale. To assess environmental noise in residential areas near the wind turbines, low-frequency sound exposure levels were measured at 50 community centers of the town. Multiple logistic regression analysis was used for evaluation of a risk factor for several noise exposure indices. Significant relationships between the distance from the nearest WT to dwellings and hearing, annoyance, sleep disorders were observed. By multiple logistic analysis the prevalence rate of sleep disorders was significantly higher for residents who reported subjectively hearing noise being than for those who did not. Moreover, the reported prevalence rate of sleep disorders was significantly higher in residents living at a distance of ≤1,500 m from the nearest wind turbine compared to that for residents living at a distance ≥2,000 m. The attitudes of residents towards wind power facilities and sensitivity to noise strongly affected their responses regarding sleep disorder prevalence. 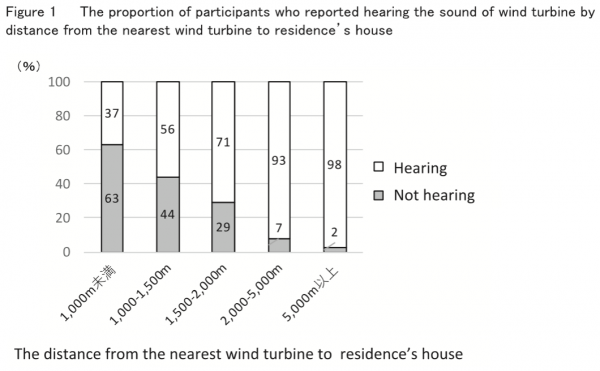 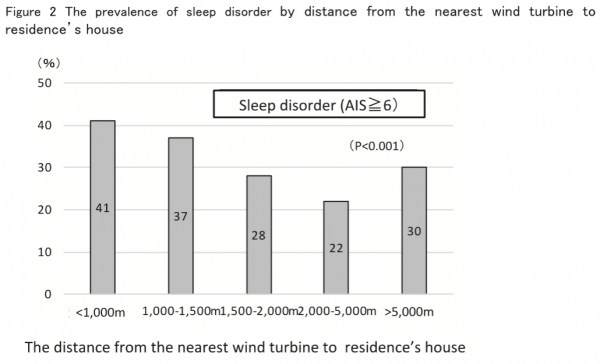 [abstract] Wind power is renewable and helps reduce greenhouse gas emission from the energy sector; however, it also has undesirable impacts on the environment. Studies from Europe and the USA report negative impact of wind farms on wildlife, especially on birds. India, the fourth largest producer of wind energy and also a mega biodiverse country has little information on this issue. Here, we report bird collisions from two wind farms: one at Kutch, Gujarat in western India and another from Davangere, Karnataka in southern India. A total of 47 bird carcasses belonging to at least 11 species in a period of three years were reported from Kutch and seven carcasses of at least three species in a period of one year were recorded at Davengere wind farm. The estimated annual bird mortality rate for Kutch was 0.478 birds/turbine and for Davengere it was 0.466 birds/turbine.

[Abstract] Underwater operational turbine noise emitted by China’s first offshore wind farm in the East China Sea Bridge of Shanghai was measured and analyzed in this study. Two sensors were used in the measurement: a hydrophone recording the underwater sound and an accelerometer placed in the turbine tower detecting the tower vibrations. Measurements were performed at two different types of wind turbines: a Sinovel 3 MW SL3000 turbine and a Shanghai Electric 3.6 MW W3600 turbine. The two turbines show similar tower vibration characteristics, characterized by a number of tonal components, mainly in the low-frequency domain (30-500 Hz). The peak vibration frequencies changed with the wind speed until the turbine approached its nominal power rating. Spectral analysis of the underwater acoustic data showed that the amplitude spectra had a strong correlation with the spectra of the turbine vibration intensity level, indicating that the measured underwater noise was generated by the tower mechanical vibration.

Wind farms have cascading impacts on ecosystems across trophic levels

[abstract] Wind farms are a cleaner alternative to fossil fuels for mitigating the effects of climate change, but they also have complex ecological consequences. In the biodiversity hotspot of the Western Ghats in India, we find that wind farms reduce the abundance and activity of predatory birds (for example, Buteo, Butastur and Elanus species), which consequently increases the density of lizards, Sarada superba. The cascading effects of wind turbines on lizards include changes in behaviour, physiology and morphology that reflect a combination of predator release and density-dependent competition. By adding an effective trophic level to the top of food webs, we find that wind farms have emerging impacts that are greatly underestimated. There is thus a strong need for an ecosystem-wide view when aligning green-energy goals with environment protection. 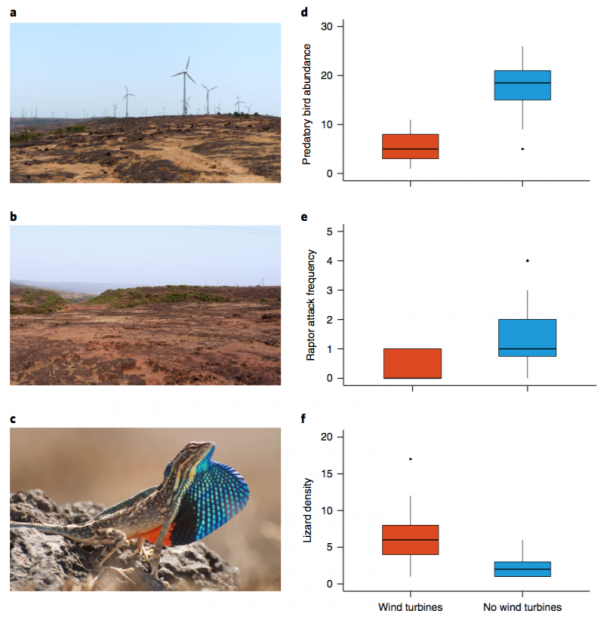