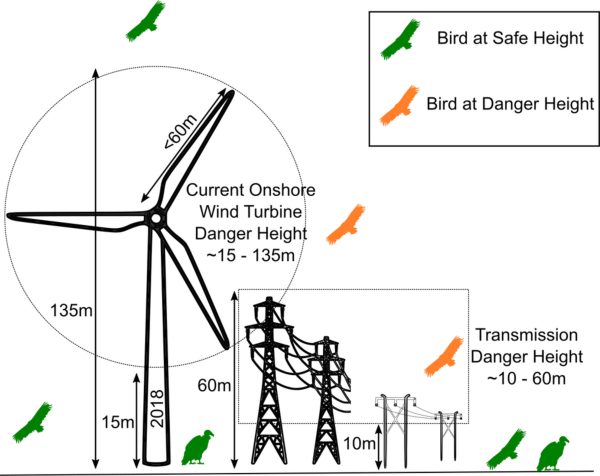 On a collision course? The large diversity of birds killed by wind turbines in South Africa

[Abstract] Wind energy is a clean, renewable alternative to fossil fuel-derived energy sources, but many birds are at risk from collisions with wind turbines. We summarise the diversity of birds killed by turbine collisions at 20 wind energy facilities (WEFs) across southwest South Africa. Monitoring from 2014 to 2018 recovered 848 bird carcasses across all WEFs, at a crude rate of 1.0 ± 0.6 birds turbine−1 y−1 at 16 WEFs with at least 12 months of postconstruction monitoring. However, mortality estimates adjusted for detection and scavenger bias were appreciably higher: 4.6 ± 2.9 birds turbine−1 y−1 or 2.0 ± 1.3 birds MW−1 y−1 (n = 14 WEFs with site-specific bias correction factors), which is slightly lower than mean rates reported in the northern hemisphere, but still well within range. A striking result was the high diversity of birds killed: 130 species from 46 families, totalling 30% of bird species recorded at and around WEFs, including some species not recorded by specialist surveys at WEF sites (e.g. flufftails Sarothruridae). Species accumulation models suggest that 184 (±22) species will be killed at these facilities, some 42% of species found in the vicinity of WEFs. This is despite the smaller number of migrants in the study region, compared with the north temperate zone. Diurnal raptors were killed most often (36% of carcasses, 23 species) followed by passerines (30%, 49 species), waterbirds (11%, 24 species), swifts (9%, six species), large terrestrial birds (5%, 10 species), pigeons (4%, six species) and other near passerines (1%, seven species). Species of conservation concern killed include endangered Cape Vultures Gyps coprotheres and Black Harriers Circus maurus, both of which are endemic to southern Africa. Every effort must be made to site wind energy facilities away from important areas for birds, particularly raptors.

Download original document: “On a collision course? The large diversity of birds killed by wind turbines in South Africa”

Egypt was planning to construct a wind farm with 3,000 MW output in the area of Zait Bay. This is situated on the mainland of Egypt opposite the southern tip of Sinai and known for very strong northerly winds and large concentrations of soaring birds.

The German Development Bank (KfW) was one of those interested in investing in this huge wind farm. It was conscious of possible risks for many migrating soaring birds and so commissioned a feasibility study. The results indicated heavy migration of soaring birds in both autumn and spring. Although at any one time only one team of two observers was on duty in the field, 145,000 soaring birds were observed in autumn and 179,000 in spring. An unexpectedly large percentage of birds was observed flying at or below 200 m or even resting on the ground. Evidently this is a tailback area, where in spring birds are often unwilling to cross the sea immediately, preferring to wait for less adverse weather conditions. In autumn they arrive at the coast low, having lost height during the sea-crossing. The data gathered in the course of the study precluded any thought of a general construction recommendation. In expectation of considerable pressure to build on the part of Egypt, I put forward a “plan B” whereby construction would be limited to the least critically sensitive areas in the north of the study area. I warned specifically against construction in the south and developed a three-zone-plan (http://www.nrea.gov.eg/OrniSummary-1.pdf).

The KfW adopted my plan B and undertook the delicate task of convincing the Egyptian authorities of the wisdom of this plan. In this they were finally successful, the Egyptians agreeing to it in the end on condition that the KfW remain an investor for a future wind farm elsewhere. The KfW is now in control of the situation and searching for viable alternative site. The KfW’s admirable reaction to the unexpected setback to its investment plans is a testimony to its highly responsible attitude towards environmental issues – for which one can only be grateful in an age where this is anything but self-evident.

The German Development Bank is not the only one to be congratulated: you are.

But only a handful of ornithologists across the world are actually defending the birds against the windfarm onslaught. Many other migration bottlenecks are being cluttered with wind turbines, and the future of migrating birds looks bleak.

The latest Dutch study estimated wind turbines to kill on average 28 birds per turbine per year. At migration chokepoints, we can expect more. Add to this the thousands of kilometers of new power lines needed by windfarms, killing up to 500 birds per kilometer in migration areas (a study quoted by Birdlife Int’l).

Quite a few migration bottlenecks and stopovers are being targeted by windfarm operators:

– Navarre (1,000+ turbines already in place and killing birds daily)
– Gibraltar (both sides of the Strait – many already built)
– Southern Morocco (narrow strip between sea and desert)
– Southern Italy and Sicily (5,000-10,000 planned)
– Malta (politicians are playing with the idea)
– Israel (too few Isreali ornithologists are fighting the threat to this most important flyway)
– Egypt (thank you, Dr. Hilgerloh, for making the massive 3,000 MW project less potentially lethal)
– Shetland Islands and Orkneys, Scotland (we know how the RSPB is backing their business partner SSE who plans a massive windfarm on Shetland)
– Western Isles, Scotland
– Isle of Skye, Scotland
– Cape Soya, Japan (white-tailed and Steller eagles, among others)
– Victoria and Tasmania, Australia (orange-bellied parrots etc.)
– Cook Strait, New Zealand (all bird traffic between both islands)
– Queen Charlotte Island, BC, Canada
– Shores of the Great Lakes, Canada
– South Texas (no. 1 bottleneck in the USA)
– Appalachian range, USA (thousands of turbines on crests that constitute
the main migratory flyway in Eastern United States)
– Chautauqua, USA (and more points in NY state and New England)
– The Isthmus of Tehuantepec, Mexico (one million birds per day can be seen
flying across in season)

Most bird societies declare in their policy statements that migration corridors should be avoided. Yet in the real world I haven’t heard any of them protest against the above projects. Hypocrisy is rife within the profession. In Mexico, the worst offender is the bird society CIPAMEX.