Abstract: Bat fatalities at wind energy facilities in North America are predominantly comprised of migratory, tree‐dependent species, but it is unclear why these bats are at higher risk. Factors influencing bat susceptibility to wind turbines might be revealed by temporal patterns in their behaviors around these dynamic landscape structures. In northern temperate zones, fatalities occur mostly from July through October, but whether this reflects seasonally variable behaviors, passage of migrants, or some combination of factors remains unknown. In this study, we examined video imagery spanning one year in the state of Colorado in the United States, to characterize patterns of seasonal and nightly variability in bat behavior at a wind turbine. We detected bats on 177 of 306 nights representing approximately 3,800 hr of video and > 2,000 discrete bat events. We observed bats approaching the turbine throughout the night across all months during which bats were observed. Two distinct seasonal peaks of bat activity occurred in July and September, representing 30% and 42% increases in discrete bat events from the preceding months June and August, respectively. Bats exhibited behaviors around the turbine that increased in both diversity and duration in July and September. The peaks in bat events were reflected in chasing and turbine approach behaviors. Many of the bat events involved multiple approaches to the turbine, including when bats were displaced through the air by moving blades. The seasonal and nightly patterns we observed were consistent with the possibility that wind turbines invoke investigative behaviors in bats in late summer and autumn coincident with migration and that bats may return and fly close to wind turbines even after experiencing potentially disruptive stimuli like moving blades. Our results point to the need for a deeper understanding of the seasonality, drivers, and characteristics of bat movement across spatial scales.

Migratory tree bats, like this silver-haired bat (Lasionycteris noctivagans) seen roosting on a tree trunk during autumn, are among the most frequently found dead at wind turbines in North America during late summer and autumn.

3. We found that avian and bat mortality rate was constant per unit of energy produced, across all sizes and spacings of turbines.

4. Synthesis and applications. In the context of repowering a wind facility, our results suggest that the relative amount of energy produced, rather than simply the size, spacing or nameplate capacity of the replacement turbines, determines the relative rate of mortality prior to and after repowering. Consequently, in a given location, newer turbines would be expected to be less harmful to wildlife only if they produced less energy than the older models they replace. The implications are far-reaching as 18% of US and 8% of world-wide wind power capacity will likely be considered for repowering within ~5 years.

[Abstract] Electricity generation from renewable‐energy sources has increased dramatically worldwide in recent decades. Risks associated with wind‐energy infrastructure are not well understood for endangered whooping cranes (Grus americana) or other vulnerable crane populations. From 2010 to 2016, we monitored 57 whooping cranes with remote‐telemetry devices in the United States Great Plains to determine potential changes in migration distribution (i.e., avoidance) caused by presence of wind‐energy infrastructure. During our study, the number of wind towers tripled in the whooping crane migration corridor and quadrupled in the corridor’s center. Median distance of whooping crane locations from nearest wind tower was 52.1 km, and 99% of locations were >4.3 km from wind towers. A habitat selection analysis revealed that whooping cranes used areas ≤5.0 km (95% Confidence Interval = 4.8–5.4) from towers less than expected (i.e., zone of influence) and that whooping cranes were 20 times (95% CI: 14–64) more likely to use areas outside compared to adjacent to towers. Eighty percent of whooping crane locations and 20% of wind towers were located in areas with the highest relative probability of whooping crane use based on our model, which comprised 20% of the study area. Whooping cranes selected for these places, whereas developers constructed wind infrastructure at random relative to desirable whooping crane habitat. As of early 2020, 4.6% of the study area and 5.0% of the highest‐selected whooping crane habitat were within the collective zone of influence. The affected area equates to habitat loss ascribed to wind‐energy infrastructure; losses from other disturbances have not been quantified. Continued growth of the whooping crane population during this period of wind infrastructure construction suggests no immediate population‐level consequences. Chronic or lag effects of habitat loss are unknown but possible for long‐lived species. Preferentially constructing future wind infrastructure outside of the migration corridor or inside of the corridor at sites with low probability of whooping crane use would allow for continued wind‐energy development in the Great Plains with minimal additional risk to highly selected habitat that supports recovery of this endangered species.

[Abstract]
Energy production by wind turbines has many advantages. The wind is a renewable energy that does not emit greenhouse gases and has caused a considerable increase in wind farms around the world. However, this type of energy is not completely free of impact. In particular, wind turbines displace and kill a wide variety of wild species what forces us to plan their location well. In any case, the determination of the effects of wind farms on fauna, especially the flying one, is difficult to determine and depends on several factors. In this work, we will try to establish a mathematical algorithm that allows us to combine all variables that affect the species with the idea of quantifying the effect that can be caused by the installation of a wind farm with certain characteristics in a given place. We have considered specific parameters of wind farms, the most relevant environmental characteristics related to the location of the wind farm, and morphological, ethological, and legal characteristics in the species. Two types of assessment are established for the definitive valuation: Total Assessment and Weighted Assessment. Total Valuation is established based on a reference scale that will allow us to establish categories of affection for the different species while Weighted Valuation allows us to establish which species are most affected. 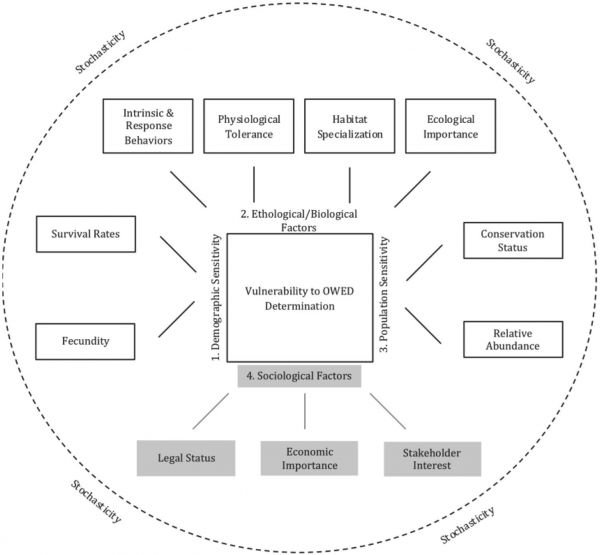 Figure 1. Factors influencing mortality of species by wind farms. The potential negative effects of wind farms depend not only on the characteristics of them (design and spatial distribution of the turbines) but also on the orography of the land, the present species (abundance of the species and also of their prey, their behaviour and their flight characteristics and socioeconomic, demographic aspects (Wing Goodale and Stenhouse).

Figure 2. Relationships of variables affecting species mortality. It is necessary to consider the possible relationships between the different variables. Probably, the potential effects of the described wind farms could increase their effects or be mutually exclusive (Marques et al.).