Assessment of low-frequency noise from wind turbines in Maastricht

Sound and noise can be characterized by their frequency. The range from 20 Hz to 20 kHz (20 cycles per second to 20,000 cycles per second) is usually called the normal hearing range or the audio frequency range. Sound with frequencies above 20 kHz is denoted ultrasound and cannot be heard by humans.

Sound with frequencies below 20 Hz is denoted infrasound. It is usually understood that also infrasound cannot be heard, but this is wrong. Infrasound is audible at least down to 1 or 2 Hz, provided that the sound pressure level is sufficiently high. The sound is perceived with the ears, usually giving a feeling of pressure at the eardrums.

Low‐frequency wind turbine noise is usually described as humming or rumbling. It may have a more or less pronounced tonal character, e.g. in terms of tones that fluctuate and vary in level and/or pitch, or of tone‐ like pulses excited with regular or random intervals. The feeling of pressure at the eardrums is also reported. It is characteristic that the noise varies a lot in time and with wind and other atmospheric conditions.

The rate of modulation of the low‐frequency noise from wind turbines (and higher frequencies as well) is often in the infrasonic frequency range, e.g. the blade passage frequency, and the noise may thus be mistaken as infrasound, even when there is little or virtually no infrasound present.

What are the main effects of low-frequency noise (LFN) on humans and when specifically do these effects occur?

Noise with prominent low‐frequency components may affect human health and well‐being to a larger extent than noise without such components.

At low frequencies, the loudness increases more steeply above the hearing threshold than at higher frequencies. Thus, a sound moderately above threshold may be perceived not only loud but also annoying. Since there is a natural spread in hearing thresholds between individuals, a low‐frequency sound that is inaudible or soft to some people may be loud and annoying to others.

Low‐frequency sound is particularly annoying, when it occurs alone or with low levels of sound at higher frequencies. This means that it is usually more annoying indoors than outdoors, since the high frequencies are more attenuated by the sound insulation of the house than the low frequencies are. Also it is often more annoying in the evening and at night, when it is otherwise quiet.

The Danish Government has changed the regulations for erecting wind turbines as a result of your research. Is that correct? And if so, what specific changes have been made?

The general (i.e. not for wind turbines) Danish limit for low‐frequency noise in dwellings is an indoor A‐ weighted sound pressure level of 20 dB (evening and night) and 25 dB (day). Only frequencies in the 10‐160 Hz frequency range (third‐octave frequencies) are included. … Unlike for other noise sources, the low‐frequency noise is not measured but calculated from measurements close to the turbine of the emitted sound. … This need not be a problem, if the calculations are correct. But they are not. … The issue is that sound at low frequencies varies within a room – usually by many decibels – and … the level should – briefly explained – be measured where the annoyed person finds it loudest. The sound insulation must be measured the same way in order to be applicable for calculations of relevant indoor levels from outdoor levels. But it was not. The indoor measurements were simply made at arbitrary positions that were not selected for a high level. Thus the obtained values of sound insulation are too high. 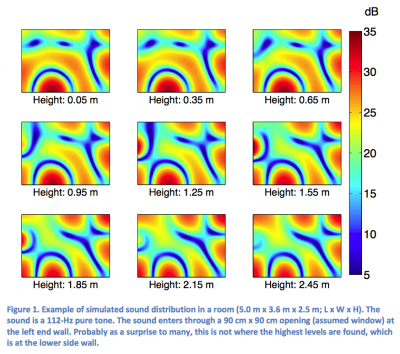 As a result, the calculation of the Danish regulation gives values that underestimate the low‐frequency noise that would be measured in neighboring houses. The magnitude of the error is estimated to be around 5 dB.

Even when an error of 5 dB might seem small, it is far from being negligible. … The loudness and annoyance increase more steeply above threshold than at higher frequencies. This means that when the level is a few decibels above the 20 dB limit, the consequences are more severe, than if a limit at higher frequencies is exceeded by the same amount. Most people will hear a sound at 20 dB, and some will find it annoying. Few people would probably accept 25 dB in their home at night and hardly anyone would accept 30 dB. …

Is it possible to indicate the expected LFN that will be produced by the planned four wind turbines of type Vestas V112 3MW, hub height 119 m?

Because of differences in sound insulation, not all houses will have the same indoor noise, and higher sound pressure levels than calculated will be observed in some houses. It is the expressed objective of the Danish regulation that higher levels will be observed in 33% of the houses. Hoffmeyer and Jakobsen had otherwise proposed that the calculated level should only be exceeded in 10‐20% of the houses. In the following, calculations have also been made with their proposed sound insulation data (results likewise corrected by the estimated 5‐dB measurement error). …

It is seen that the 20‐dB limit will be exceeded in a very large area with many dwellings and not only at the nearest neighbors. It should be remembered that the loudness increases more steeply above the hearing threshold than at higher frequencies, and that “The perceived annoyance from low frequency noise increases strongly when the noise reaches above 20 dB” (quote from Danish EPA). 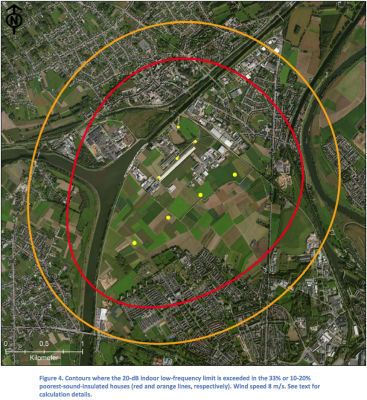 General comments to the project

Since most complaints relate to the wind turbine noise in the evening and at night, we appreciate that there is an additional Dutch limit for the level at night Lnight. However, this limit also applies to a yearly average, which allows more noise at some nights, if there is less noise at other nights. This is not the way the human organism works, though. If we are disturbed by noise in the night, we cannot take advantage of the fact that, after a while – tomorrow, after some days, maybe a week – there will be nights with less or no noise. It is our conviction that limits should apply to the actual noise in situations that occur regularly.

Prepared for the City Council of Maastricht, 10 April 2012.

[4] Assessment of low‐frequency noise from wind turbines in Maastricht: https://docs.wind-watch.org/Maastricht_Moeller_et_al_2011.pdf