Guidelines and regulations for the siting of industrial wind turbines (IWT) close to human habitation are generally predicated on the need to protect the sleep of the residents. The recommended setback distances and “safe” external noise levels make the assumptions that IWT noise can be regarded as similar to other forms of environmental noise (traffic, rail and aircraft) and is masked by ambient noise. There has been no in dependent verification that these assumptions are justified and that the safeguards are sufficient to protect sleep.

Anecdotal complaints of annoyance and health effects from IWT noise have grown in number in recent years, not least because turbine size has increased and they have been placed closer to population centers. The predominant symptom of health complaints is sleep disturbance (Frey & Hadden 2007; Pierpont 2009; van den Berg et al. 2008; WindVOICe 2010). The consequences of sleep disturbance and the contribution of environmental noise are well documented (WHO 2009).

Complaints of adverse health effects were made shortly after IWT installations at Mars Hill and Vinalhaven, Maine, USA, began operating. A preliminary survey at Mars Hill, comparing those living within 1,400 m with a control group living 3,000-6,000 m away showed that sleep disturbance was the main health effect (Nissenbaum 2011, submitted for publication). A further study was therefore carried out at both Mars Hill and Vinalhaven using validated questionnaires and comparing those living within 1.5 km of the turbines with a control group living 3,500-6,000 m away.

The Mars Hill site is a linear arrangement of 28 General Electric 1.5 megawatt turbines, sited on a ridgeline. The Vinalhaven site is a cluster of three similar turbines, sited on a flat tree covered island. All residents living within 1.5 km of an IWT at each site were identified via tax maps, and approached either door to door or via telephone and asked to participate in the study. Homes were visited up to three times or until contact was made. Those below the age of 18 or with a diagnosed cognitive disorder were excluded. A random sample of households in a similar socioeconomic area 3 to 7 km away from IWTs at each site was chosen to participate in the study as a control group. Households were approached door-to-door until a similar number of participants were enrolled.

Effect of Site on outcome parameters

The effect of Site was assessed by fitting Site (Mars Hill vs Vinalhaven) as a fixed effect, and as an interaction term with the main independent variable of interest (distance). Among all outcomes investigated, Site, and Site*Distance were not significant.

There were no significant differences between the groups with respect to household size, age, or gender (Table 1).

ESS, PSQI and SF36 scores were modeled against distance from the nearest IWT using the equation: Score = ln(distance) + gender + age + site [controlled for household clustering] and are shown in Figures 1-3. In all cases, there was a clear and significant relationship with the effect diminishing with increasing distance from the IWT. 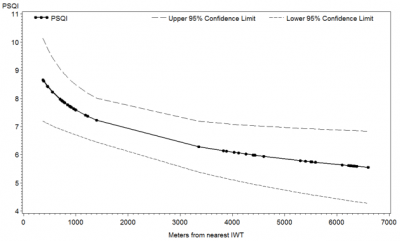 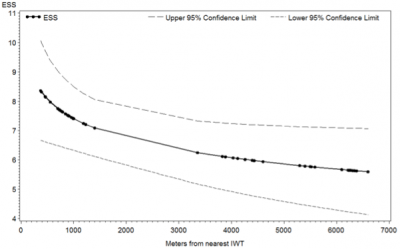 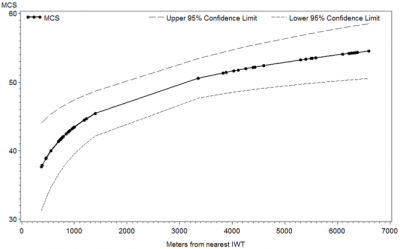 This study, which is the first controlled study of the effects of IWT noise on sleep and health, shows that those living within 1.4 km of IWT have suffered sleep disruption which is sufficiently severe as to affect their daytime functioning and mental health. Both the ESS and PSQI are averaged measures, i.e. they ask the subject to assess their daytime sleepiness and sleep quality respectively, over a period of several weeks leading up to the present. For the ESS to increase, sleep must have been shortened or fragmented to a sufficient degree on sufficient nights for normal compensatory mechanisms to have been overcome. The effects of sleep loss and daytime sleepiness on cognitive function, accident rate and mental health are well established (WHO 2009) and it must be concluded that at least some of the residents living near the Vinalhaven and Mars Hill IWT installations have suffered serious harm to their sleep and health.

The significant relationship between the symptoms and distance from the IWTs, the subjects’ report that their symptoms followed the start of IWT operations, the congruence of the symptoms reported here with previous research and reports and the clear mechanism is strong evidence that IWT noise is the cause of the observed effects.

IWT noise has an impulsive character and is several times more annoying than other sources of noise for the same sound pressure level (Pedersen & Persson Waye 2004). It can prevent the onset of sleep and the return to sleep after a spontaneous or induced awakening. Road, rail and aircraft noise causes arousals, brief lightening of sleep which are not recalled. While not proven, it is highly likely that IWT noise will cause arousals which may prove to be the major mechanism for sleep disruption. It is possible that the low frequency and infrasound components of IWT noise might contribute to the sleep disruption and health effects by other mechanisms but this remains to be determined and further research is needed.

Attitudes to IWT and visual impact have been shown to be factors in annoyance to IWT noise (Pedersen et al. 2009) but have not been demonstrated for sleep disturbance. Most respondents in the present study welcomed the IWT installations as offering economic benefits. The visual impact of IWT decreases with distance, as does the noise impact making separation of these factors impossible.

We conclude that IWT noise at these two sites disrupts the sleep and adversely affects the health of those living nearby. The current ordinances determining setback are inadequate to protect the residents and setbacks of less than 1.5 km must be regarded as unsafe. Further research is needed to determine a safe setback distance and to investigate the mechanisms of causation.

WHO (2009). Night noise guidelines for Europe. Copenhagen: WHO Regional Office for Europe.