Tiny the Turbine is a moral tale that tells the truth about the impacts of industrial wind development in a way children can understand. It has been written by a Highland anti wind campaigner, illustrated by a supporting Cartoonist and published online today. 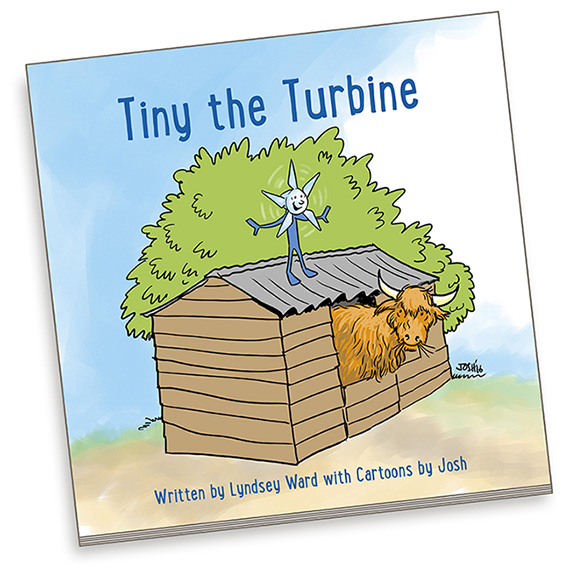 Some time ago it was discovered that not only were multinational wind developers welcomed into our schools, they come bearing gifts and speak to pupils regarding only the ‘benefits’ of wind development.

Children are asked to name turbines and design logos. They are taken to visit wind farms. The message is clear. Build wind farms – or else the planet will suffer and the polar bears and penguins will die!

The other side of the story has never been told as far as we are aware.

There is no hard evidence that building wind farms will do anything to combat climate change. Many things like grid connection (no matter how many miles), foreign parts and workers, pollution caused in China mining and processing necessary rare earth minerals and decommissioning are not included in any CO₂ savings calculations, making emission claims a farce.

Not only do wind developers go into schools, they produce child friendly stories about turbines. Tommy the Turbine,Timmy the Turbine, Lofty etc. All designed to put a positive spin on a controversial industry and keep profits flowing from the next generation.

Lyndsey Ward wrote Subsidy Sam,illustrated by Josh, in retaliation to this shameless indoctrination earlier in the year. It was a satirical story and really meant for adults.

Subsidy Sam went global and following requests to write a real children’s story Lyndsey came up with Tiny the Turbine and Josh agreed to illustrate it.

Children should never be exposed to indoctrination by multinational companies with a product to sell with no access to the opposing argument. It is happening again and again in Scotland. Fast food and fizzy drink giants were allowed into schools years ago – we now have a child obesity epidemic.

This wee story is moral. It smashes the myths of clean and green and environmentally friendly wind energy. Yet it does so in a way that is reasoned and sensible and so obvious to those who know the other side of the industry, and in a way that children will understand.

Importantly it is written and illustrated by people who are not paid by big industries with the deep pockets of the multinationals. People who care passionately for the environment and also that children are not indoctrinated by an industry determined to keep its shareholders happy. It is an honest reflection of what we see is happening – the other side. The side children are never told.

This tale, although written in Scotland, can be told in any country where there is industrial wind development and we hope it gets used around the world and translated into other languages.

It comes with a foreword from SarahLaurie, CEO of the Waubra Foundation in Australia which promotes health research and regulation of environmental noise pollution.

The message in this story to all governments supporting industrial wind is:

Stop allowing communities to be ransacked by wind developers against their will. Give communities a wind veto and the final say on the developments that they are forced to live with.

Stop enriching the already wealthy developers and landowners to the detriment of your own people.

Stop denying the health impacts suffered by humans and by animals.

Stop ignoring pollution concerns regarding drinking water and the environment.

Stop dismissing the deaths of protected birds and bats by turbine blades as numbers are reaching catastrophic proportions across the world.

Speak and act for the people you are paid to serve and not the rich multinationals.

The hands of the wind industry and supporting politicians are stained by the tears of the unwilling communities they have exploited and continue to exploit.

In addition to the above and specifically to the Scottish Government:

Give your citizens the wind veto as our counterparts in England have, so local opinion actually means something in the planning process.