The John Muir Trust and the University of Leeds Wild Land Research Institute have produced an animation showing the dramatic change in Scotland’s landscape over the past 20 years as a result of the proliferation of wind turbines.

The animation is based on a series of maps that illustrate the extent of Scotland’s land area from which wind turbines are potentially visible. It includes both built and consented wind turbines above 20 metres tall, and excludes applications still in the pipeline.

The maps were developed by the Wild Land Research Unit, based on data published by Scottish Natural Heritage.

They reveal that the percentage of Scotland’s landscape visually affected by wind turbines has risen dramatically from just 1 per cent in 1995, to 16 per cent in 2005 then to 48 per cent in 2015. Within Wild Land Areas, the figures have risen over the past decade from zero to 17 per cent. 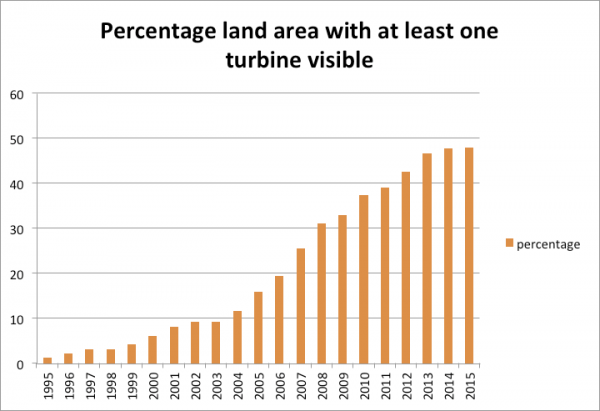 Watch on You Tube.

John Low, Policy Officer of the John Muir Trust said: “This animation by the Wild Land Research Unit illustrates the accelerating impact of wind turbines on Scotland’s landscape over 20 years.

“Our concern has always been the encroachment of turbines into wild land, and we’re pleased to say that we’ve begun to see some positive progress over recent months.

“Since these maps were compiled, the Scottish Government has rejected a number of large-scale wind farms in Wild Land Areas, otherwise the situation would have been much worse.

“At the same time, we remain vigilant. There are still several outstanding applications for giant wind farms on wild land, which if given the go-ahead will have a profound impact decades into the future.

“We are publishing this animation now to bring home to the public, and especially to politicians at national and local level, the long term consequences for Scotland’s wild land of the decisions they make today.”