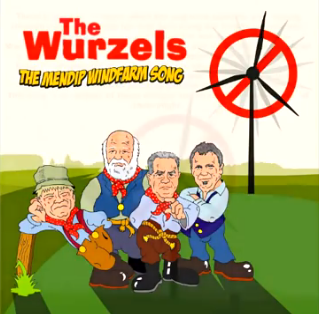 “The Mendip Windfarm Song” is aimed at highlighting the proliferation of proposals for wind turbines across the West Country and furthermore the entire UK, disregarding the views of the local communities they are imposed upon.

The song was penned after hearing of a proposed 66m turbine in the quiet village of Laverton, near Norton St Philip where the band’s HQ is based and news of the song has led to huge support for its release.

A spokesman for the band says “Renewable energy has to be considered as an important part of the make up of our energy solutions. However imposing these cost inefficient turbines on communities after they have been opposed by local parishes and refused by local planners seems very unfair and undemocratic.

It seems that the government have lost their will to support onshore wind farms and the general public are unhappy to fund the huge subsidies we are forced to pay to finance them. So why are the inspectorates still allowed to overturn these local views and decisions?

The Mendip Windfarm Song is available to download on iTunes from 11th May. 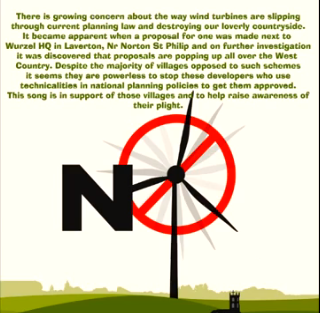 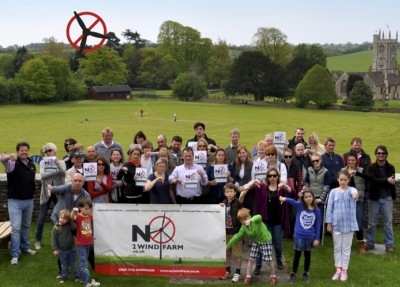 The opposition group from Laverton and Norton St. Philip called no2windfarm.co.uk start their campaign this week as the public meeting presented by wind farm developers Distgen has been announced for Friday 16th May at Palairet Hall in Norton St Philip.

In the light of this proposal near Frome and others nearby in Thoulstone, Chantry and Wanstrow, the growing amount of applications for wind turbines in the West is now creating widespread concern throughout local communities. However, despite local planning refusals the energy companies find ways to overturn these decisions on appeal at a national level demonstrating the lack of regard to the decisions of local planners and the communities they represent.

This coincides with The Wurzels’ announcement of their new single “The Mendip Windfarm Song” which highlights the proliferation of wind farm applications in the West.

Tim Page, a local campaigner against these local proposals welcomes the song. “It’s a mad world that encourages the building of these useless, noisy, industrial machines across our beautiful countryside and far too close to people’s homes. If it was not for serious subsidy abuse they simply would not be built. It’s great that The Wurzels have helped highlight the problem and draw attention to what is going on in the Mendips. There is a feeding frenzy in the subsidy trough by developers from Wells to Norton St Philip and Shepton Mallet to Frome. We have to do all we can to stop it.”

A spokesman for the no2windfarm.co.uk action group based in Laverton says “this proposal affects one of the UK’s most celebrated village views at Norton St Philip and one of the oldest Grade 1 listed buildings, The George Inn, and has limited support from the community it will be imposed upon. We are not against renewable energy and would have supported solar energy on the site but an industrial wind turbine is visually intrusive.”

Distgen, who have just erected one in Wanstrow retracted plans for turbines at Callow Rock in Shipham where Distgen boss John Zamick lives after 63% of the residents were against the scheme out of 238 votes cast.

The European Commission is to ditch legally binding renewable energy targets after 2020 in a major U-turn and admission that the policy has failed industry and consumers by driving up electricity bills. A Brussels paper on the European Union’s “2030 Framework for Climate and Energy” will instead propose binding targets to reduce carbon emissions without imposing requirements on how the reductions are made.