So Much Wind: The Myth of Green Energy, by Struan Stevenson 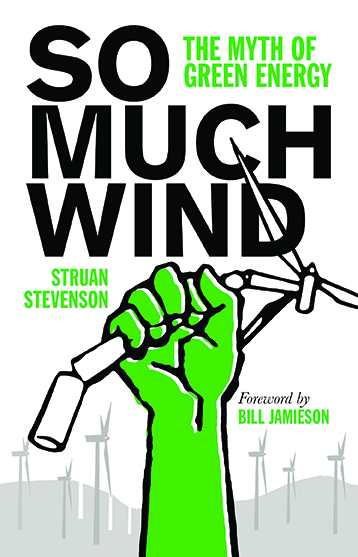 Also available as an eBook from Amazon, Waterstones, and Kobo.

This book seeks to evaluate the Scottish Government’s obsession with renewable energy, while at the same time looking at alternative sources of power that may prevent the lights going out across Scotland.

Struan Stevenson talks about his book:

The energy crisis is one of the most pressing and significant problems the world has to face. With limited resources of fossil fuels left, and the additional political and environmental issues that surround their use, it is clear that life on earth cannot continue as it is without the development of alternative sources of power. In Britain, many are rightly wary of expanding the nuclear energy programme. The UK Government’s policy of support for wind energy and its attempts to achieve 20% electricity generation from renewable sources by 2020 has been lauded by many, yet described as “a fatuous obsession” by others. Scotland’s targets are five times more ambitious and therefore invite intensive scrutiny. The time has come to expose Scotland’s green energy myth. The truth is that wind turbines violate the principle of fairness by transferring vast amounts of money from the poor to the rich. They despoil our unique landscape and environment; they risk plunging the nation into a devastating energy crisis and through noise, the flicker-effect and vibration, they abuse the health and welfare of people and animals which have to live near them. They are visual monstrosities that produce a trickle of electricity at vast cost to the consumer and they do not significantly reduce CO₂ emissions.

Struan Stevenson has served as a Conservative Euro MEP for Scotland since 1999. He is President of the Climate Change, Biodiversity and Sustainable Development Intergroup and Chairman of the European Parliament’s Delegation for Relations with Iraq. In 2010 he was appointed by the Organisation for Security and Cooperation Europe (OSCE) as a Personal Representative (Roving Ambassador) of the Chairman in Office (Kazakhstan) responsible for Ecology and Environment with a particular focus on Central Asia. His previous book, Stalin’s Legacy, was published in August 2012.

Bill Jamieson is Executive Editor of The Scotsman writing regularly on finance and economics as well as politics and current affairs. He is also the economics columnist for Scotland on Sunday and a contributor to the Spectator Business magazine, City AM and a regular commentator on business and economics affairs for BBC Scotland.